Today’s journey started off going to Kilpeck church.The church was build by the Normans after the conquering by William. The church is built in the typical Norman Romanesque style. It has a nave, chancel, and apse. What is not typical is the sculpture that adorns it. The Hereford School of Sculpture was a collection of masons and master masons, and only the master masons would do the actual sculpting. In medieval times, a normal person would not get very high class status, but some master masons did. The names of the master masons were not recorded, or lost to time, but their accomplishments were not. Some master masons were even given land and could have more land than the priests. So lets take a look at what made the masons masters. 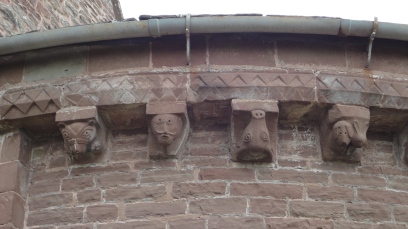 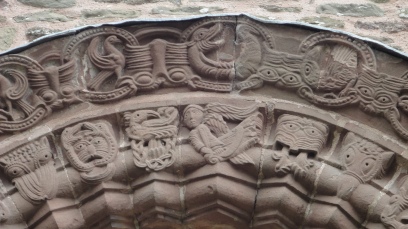 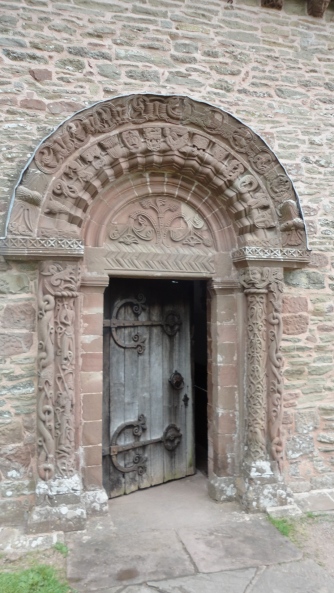 The church was commissioned by Hugh be Kilpeck, a wealthy aristocrat. When Hugh commissioned the church, he blended pieces of sculpture from around the globe. One reason is because it is suspected that Hugh was a Knight Templar. 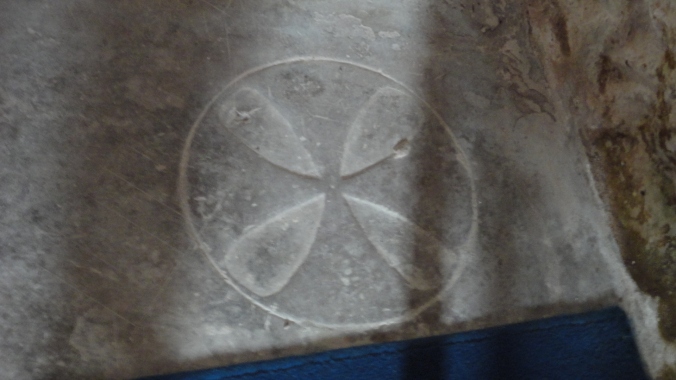 Grave marker of a Knight Templar. There is no name because the name was known to God. 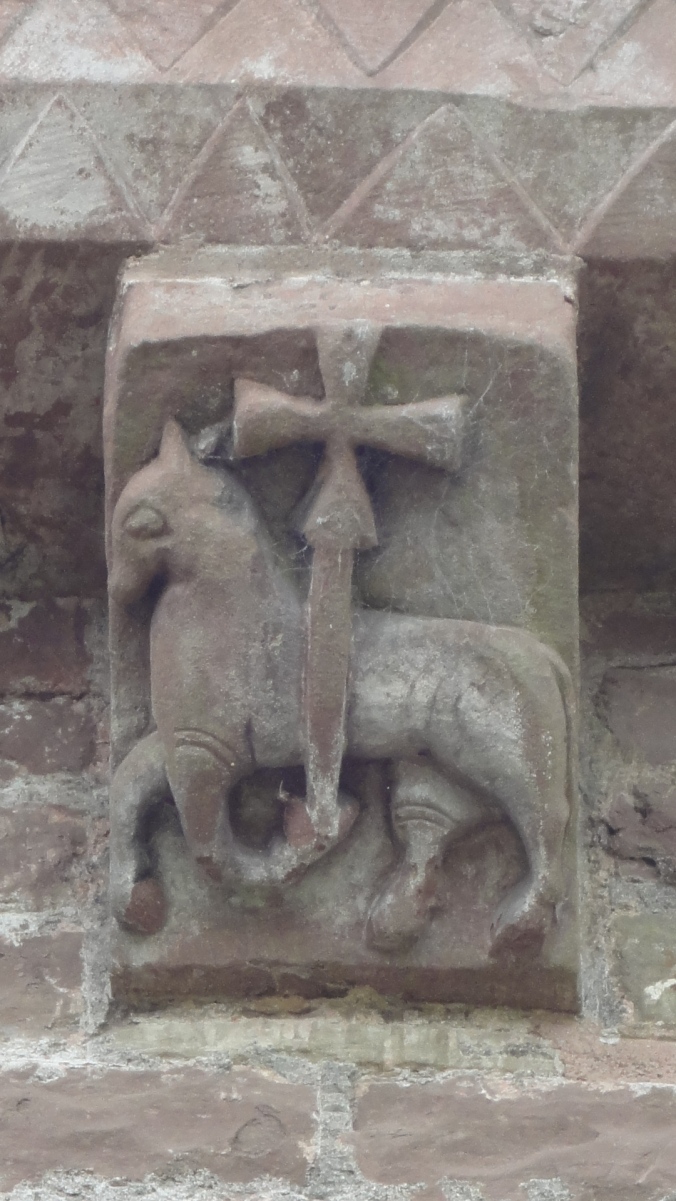 Corbel sculpture that is suspected to represent the Knights Templar.

The church contains bits of sculpture and design from the Saxons, Celts, Scandinavians, and Normans. Before I show that part, another interesting fact is the orientation of the church. The normal orientation is east west, but Kilpeck is different because of what is underneath it. Under the altar is a spring with a river flowing from it and the church is situated so the stream flows down the length of the nave.

This image shows the section of he church that could be remains of the previous Saxon church. The coining on the corner is called long and short work, which you have seen on Earls Barton, and the arch that can be seen in the wall to the left is similar to the Saxon construction of arches using Roman bricks like at All Saints Brixworth. We don’t know why it is still there, but it is, so all we can do is guess. 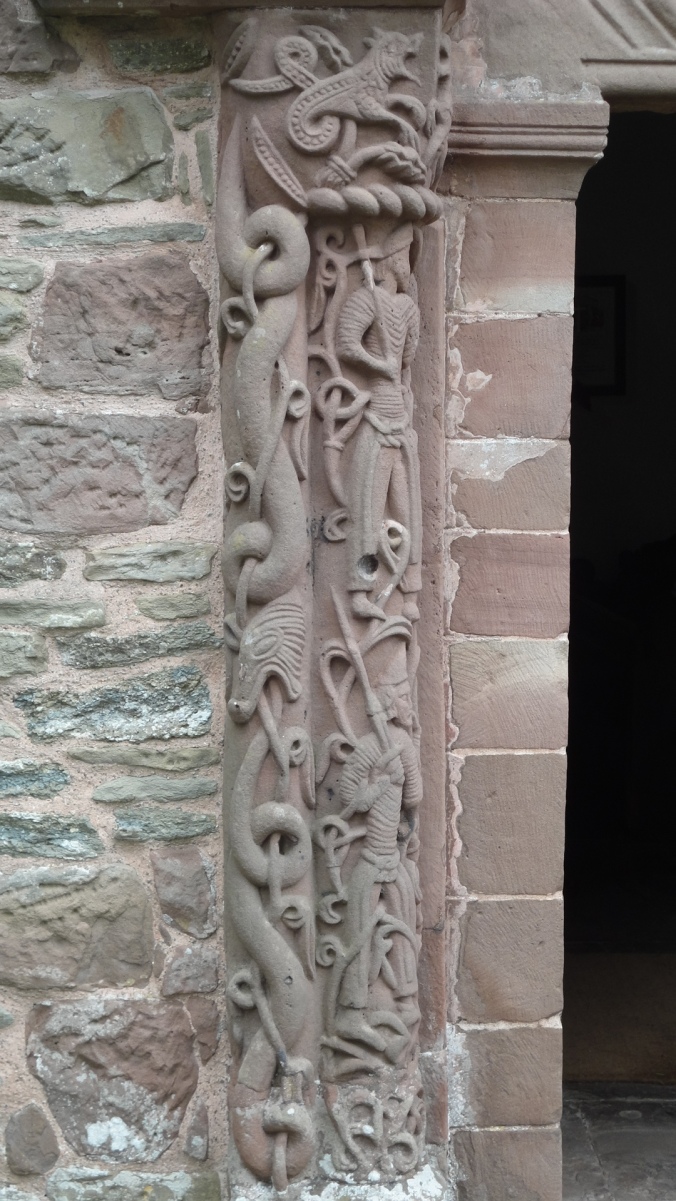 These pictures show the variety in the sculpture that come from different cultures around the known globe.

The inside of the church also has some sculpture as well. 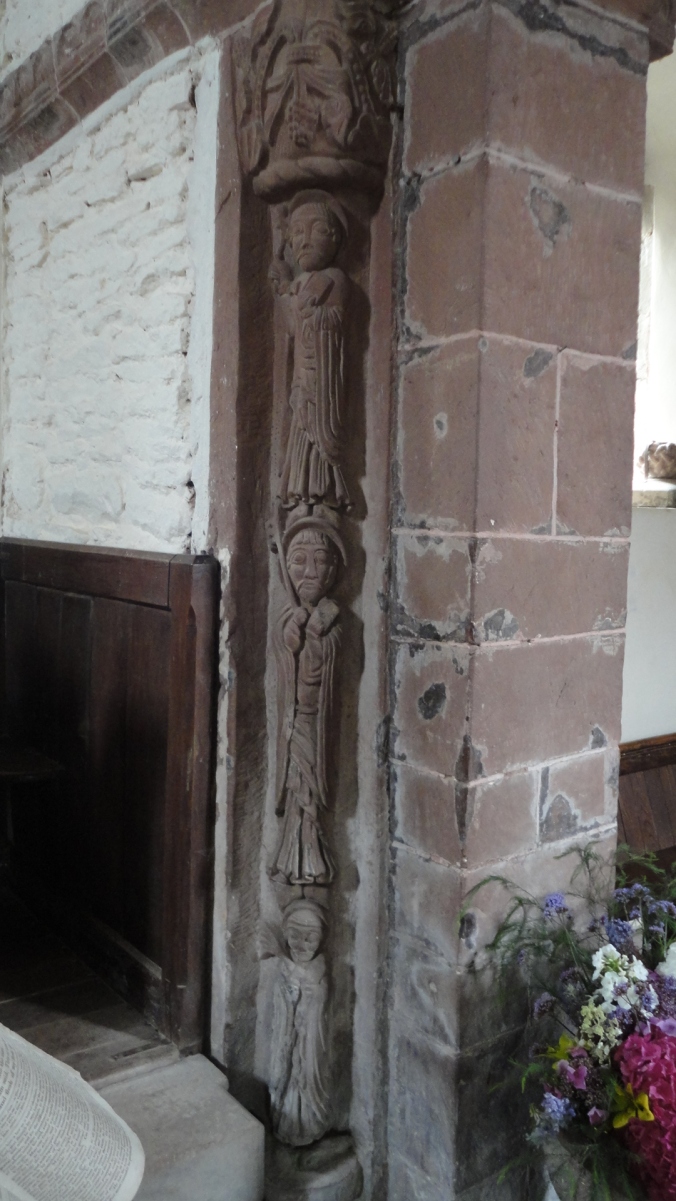 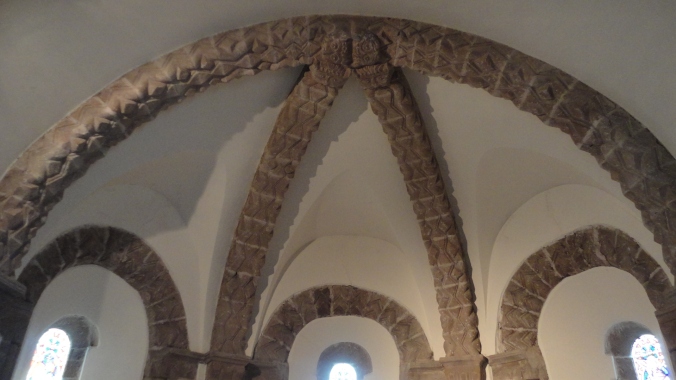 The purposes of the arches was to signify the different parts of the church and to give the common people explanations about what is happening and what everything means.

Around the church there were also two points of interest for our group. One architectural, one not so much. The architectural one was that Hugh de Kilpeck build a motte with a small fort on it right next to the church. What remains of the motte are only two walls, but they give you a sense of what existed there and the size. 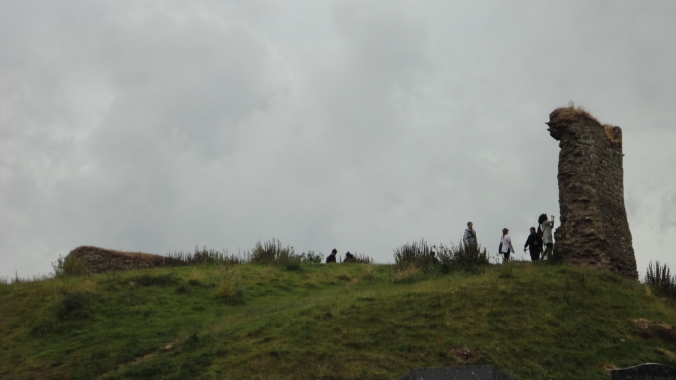 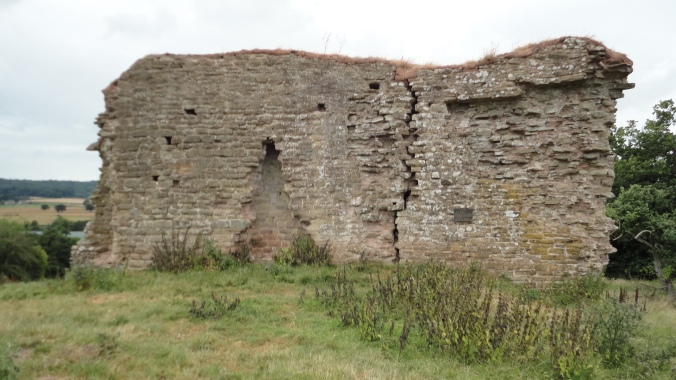 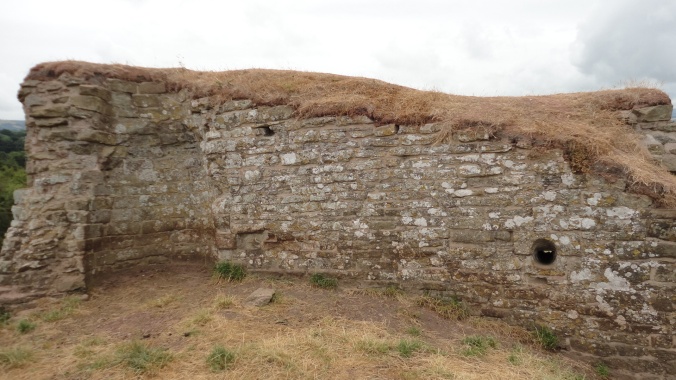 The other point of interest for some members of the group were cows.

The next stop for us was to Shobdon Church. When the bus pulled up to the stop, it was a small lane way that said no cars allowed. So we got off and ended up having a nice walk through the countryside to the church. This is the approach we had. 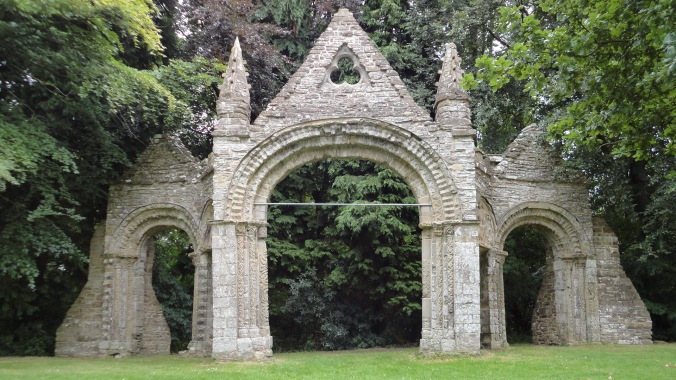 What has happened here is an example of 18th C. Romanticism. This folly that was created was taken from the inside portions of the South and North entrances to create the side arches here, and the transition arch from the nave to chancel to make the main center arch. The original building was built in 1136 and has many same features as at Kilpeck. Very ornate sculpture and an eye for detail. But what you can see now is the mind set of the 18th C. English. What that is, is they liked the medieval period, but didn’t concern themselves with preserving it and used it’s building as play toys. Once they built the garden ornaments, they built this.

On the outside, you could think this could be an older church, but once you see the inside, it is clear that it was built in the 18th C. 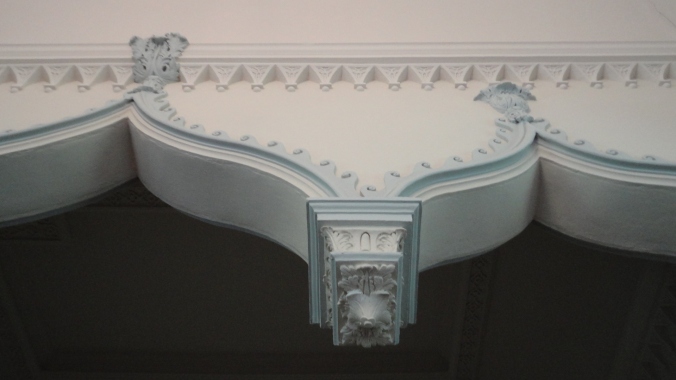 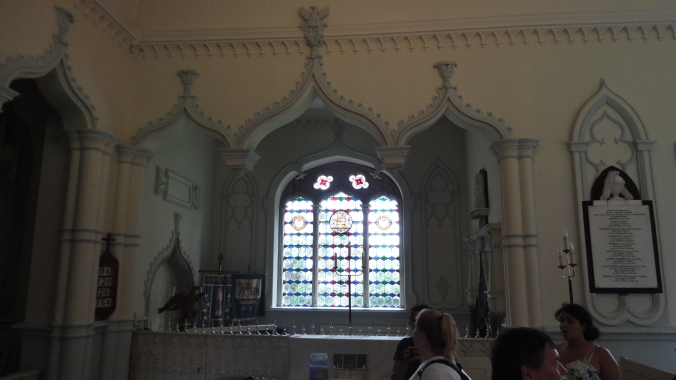 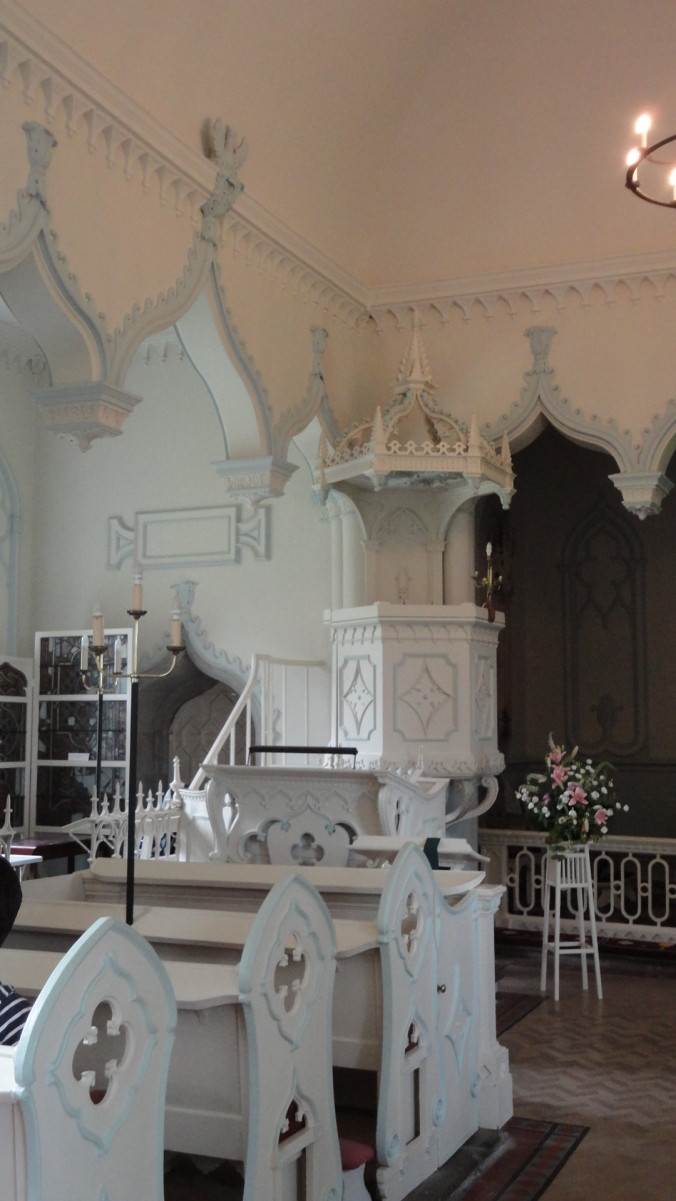 This is the 18th C. romanticized version of Gothic architecture. To them this is what Gothic should be. Everything is plaster and ornamented, and has changed the rules of what Gothic building elements should be present. For example on the curved arches, there should be a column there, but instead there is only an ornamented capitol like sculpture.

What these two sites can show you is how perspective changes and cultures change. In the times of the Normans, their buildings were grand an beautiful, then in the 18th C. they thought them ugly and not worth anything, then today we treasure the history they teach us and try to preserve them as much as possible. And with this in mind, it is not entirely impossible that at one point we will switch back to the mindset of 18th C. high society and disregard the previous true architecture forms and build romanticized versions of our own, with Westminster Abby sitting in someones back garden.

More cows, because why not.